Update 5 – January 8th 2016: Fixed-wow-exe-6.2.3-20886 has been added. Also new install notes have been added. I tried to spice up the install notes with some ascii art. Is this any good or more annoying? Leave your comment and let me know.

Update: The WoD models can be found on the forum, you’ll need to register to view the forum. The models posted on the forum is not the final version, but you can download them and have fun =)

Boggtroll (a contributor on the Azerothica forum) has been working quite a bit lately, to create model changes to the new WoD models. I very much appreciate his work. Below you can find the current models that have been worked with. And soon I will add the nessasary models to my own “Azerothica” nude patch. However if you would like to have the largest tits possible you can always head on over to the forum, and read his post and download all of the different types of tit sizes that you enjoy. His thread can be found here: http://www.forums.azerothica.com/viewtopic.php?f=15&t=161

Please report if you see any bugs =)

The HD blood elf skins have been added to the nude patch for Warlords of Draenor. Just download the nude patch from the download section. Comparison images between old and new model(s) can be found here: https://imgur.com/a/Tsx3Z

The old models still have model changes (in the model change nude patch), just not the new WoD models yet. A friend of mine will do the edits, but he’s currently busy. Eventually it will be made for all the new race models. So for now you have to live with non model change on new WoD models for both kind of patches.

Besides this there are still some other models that may need some retouching but i just do not have the time at the moment, however I wish everyone lots of naughty fun in WoW =)

Nude skins for Blood elf is being worked with and also some other races now requires some adjustments as skin tones on other races were changed slightly by Blizzard in patch 6.1.0.

I wish every visitor a happy new naughty year. I’m sure that 2015 will bring more naughtiness for everyone =)

It is possible to edit the new models, I’ve  read a few posts on the Darknest forum about editing the new models. It has been tested and it works. Now it is up to skilled modelling artists to edit and release some great model edits of the WoD characters. So this means that in the future, the model change nude patch will get model edited characters for the new updated ones.

Be patient, the models will get updated, but it is a lot of work. 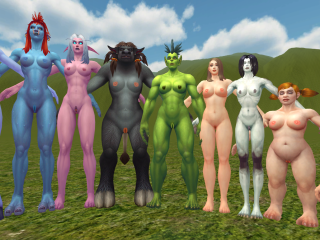 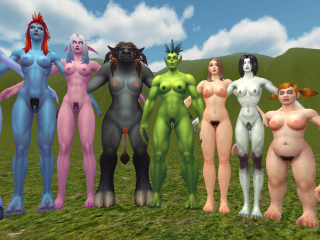 I have re-done the Human Female WoD model skin texture, i werent too happy with the earlier version of my WoD human skin. Of course shaved version will also be avaliable later.

You can see a comparison between old and new human female skin. I do have to mention that the “old” one is my model changed human female with a little pointy nipples.

It is at this moment not possible to do model changing, to my knowledge, of the WoD models. So this is the “non model edit” human female =)

I may add that since blizzard is going to leave worgen, goblin and pandaren female, that means that these will look the same in my WoD nude patch as they did in my Model Change Nude patch for Mists of Pandaria.